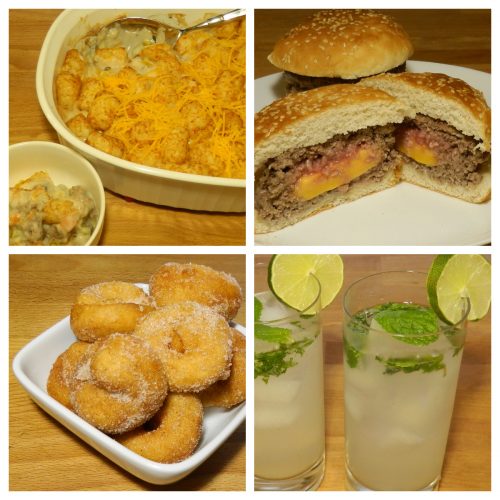 MEETtheENEMY
The University of Minnesota’s Minneapolis location is a campus divided: split by the Mississippi River into East and West Banks and connected by the Washington Avenue Bridge. The St. Paul campus sits about three miles away. It’s cold up there come wintertime, but the Gopher Way tunnels and skywalks allow students to avoid the severe temps and nasty weather.

The Golden Gophers were named from the color of their uniforms and Minnesota’s  nickname (the Gopher State). When they wore their all-gold uniforms, they were on a golden streak, winning the national championship three years running:  1934, 1935, and 1936! Make sure to stop by the Goldy Gopher statue on campus—rub Goldy’s giant bronze teeth and make a wish!

While you’re strolling around campus, grab a healthy snack while thanking the UMN scientists for developing Honeycrisp apples. Recently, the Honeycrisp became one of the top five apples produced in the U.S.—edging out the Golden Delicious (”WHAT???”, Jeff says—the Golden Delicious is his favorite)—and is predicted to be in the top three by 2020. I didn’t know that apples had rankings. (Jeff didn’t know that some Frankenapple upstart could come along and replace the best apple in the world.)

Explore Minneapolis’ history at the Mill City Museum, an eight-story historic mill turned history museum. Industrialists in the mid-1800s realized they could harness the St. Anthony Falls (known as the “Niagara of the West’) to power sawmills and flour mills, bringing thousands to the area. Trains from the Plains brought in wheat, which was milled on the Minneapolis riverfront, with the resulting flour distributed to points east. Pillsbury and General Mills both started on the banks of the Mississippi River, and Minneapolis held the title of “Flour Milling Capital of the World” for 50 years. The views from the museum’s rooftop Observation Deck are not to be missed.

EATtheENEMY
Take one starch (think Tater Tots), one meat, cream of mushroom soup, and vegetables. Cook it in a 9×13 pan, and off you go to any church supper, funeral, family reunion or gathering. Hot Dish is so well-known to Minnesotans that there is even an annual competition among politicians:  the Minnesota Congressional Delegation Hotdish-Off. If you want to shake up your hotdish with some new flavors, check out their recipes, each rated from 1 to 5 tots.

Our main dish choice for UMN had to be the Jucy Lucy burger from Minneapolis’ Matt’s Bar.  As legend has it, in 1954 a regular customer asked owner Matt Bristol to make something different:  two hamburger patties with cheese in the middle. When it arrived, the customer exclaimed, “That’s one juicy Lucy!” The misspelling came years later when an artist designing T-shirts for the bar left out the i. Get the whole story of Matt’s Bar and their rivalry with the 5-8 Club (which also claims to have invented the Juicy Lucy) here. The 5-8 Club kept the traditional spelling.

With more than two million people attending each year, the Minnesota State Fair boasts the largest average daily attendance of any state fair in the U.S. All those people gotta eat. Think of the classic state fair foods: turkey legs, waffle cones, cotton candy, corn dogs, and, one of my favorites, a small bag of hot-from-the-fryer mini donuts coated in brown sugar. Two bites and they’re gone.  So hard to resist! There are at least three sellers at the Minnesota State Fair: Grandstand Mini Donuts, Tiny Tim Miniature Donuts, and The Donut Family. Which is your favorite? (My bag of baker’s dozen mini donuts came from our local farmer’s market, and were still warm when I got them home … yum!)

DRINKtheENEMY
The Bootleg is apparently Minnesota’s unofficial official cocktail, whatever that means, and dates from Prohibition.  Wanting to cover the harsh taste of bootlegged booze, the country-club set mixed lemon and lime flavors, sugar, and mint, and the Bootleg was born.  Most recipes call for using a special mix available only in Minnesota, but several kind souls posted alternate methods on the internet, leading to our much simpler but still delicious version.

Also spied in enemy territory
For a true dive bar in St. Paul try the Gopher Bar and order the best coney dogs around. Paired with an ice-cold beer and fries, this is one sweet meal. But leave the kids at home—it’s that kind of place.

Visit the largest urban sculpture garden, the Minnesota Sculpture Garden. The iconic LOVE and Spoonbridge with Cherry sculptures are just a couple worth seeing in the park. Or maybe waterfalls are your thing. Don’t miss the 53-footer in Minnehaha Regional Park, stroll through the Longfellow Gardens, or grab a bite to eat at the Sea Salt Eatery (a seasonal restaurant, open April-October).

Stroll along Summit Avenue in St. Paul, the longest stretch of Victorian homes (4½ miles) in the nation. With this walking tour, you can learn the stories behind these grand homes.

Shout-out to Maria and Tom; thanks for your Gopher State tips!

Other cocktails worth trying