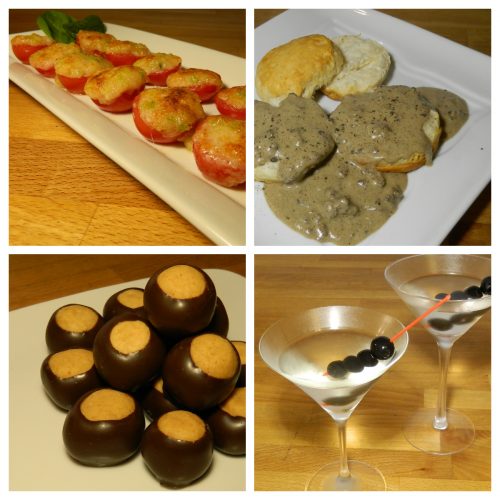 This week’s menu is a little unusual, as there is no Ohio State University football game this week. Instead we chose to highlight some popular Ohio foods and ingredients.

MEETtheENEMY
What is Ohio State football worth?  To some of us … priceless is the answer.  But in 2017, an associate professor of finance from Indiana University–Purdue University Columbus valued three college football programs at more than a billion dollars: Ohio State ($1.5 billion), Texas ($1.24 billion), and Oklahoma ($1 billion).  Thanks, Ryan Brewster, for confirming what OSU fans already knew: we are Number 1!

Check out some Buckeye bling, including the first College Football Playoff National Championship trophy for their 42-20 win over the Oregon Ducks in 2015 (which, incidentally, was the day that EATtheENEMY was born).  Several of the trophies from OSU’s eight championship wins, 37 Big Ten championships and six division titles are also on display at the Woody Hayes Athletic Center, 2491 Olentangy River Road.

The Ohio State campus buzzes with excitement on gameday. If you haven’t been to a Skull Session, definitely put that on your list. It’s a pre-game pep rally featuring the team captains, remarks from the coach, and a foot-stomping playlist from the OSU Marching Band to get your gameday started. It’s held at St. John’s Arena and starts 2-½ hours before kickoff. Seats for this free event are in high demand. Doors open four hours before kickoff, so get in line early. To see the players and coaches before they suit up, stand between St. John’s and the ‘Shoe two hours before kickoff; the band marches in about an hour later.  And don’t miss the marching band’s script Ohio, recently named the #1 college football tradition by NBC Sports.

How can a tree be the inspiration for a mascot? Buckeye trees are native to Ohio and built from tough stuff: adaptable to the environment, producing lightweight but durable wood.  Did you know it’s good luck to carry a buckeye nut in your pocket, just like a four-leaf clover or rabbit’s foot? At OSU, Coach Urban Meyer started a new tradition: the losers of the spring Scarlet and Gray exhibition game must clean up and mulch Buckeye Grove. This tree-lined walkway near the stadium’s contains one buckeye tree for each first-team All-American player.  Nick and Joey Bosa are one of only two sets of brothers who have trees in Buckeye Grove. Any guesses for the other pair? Archie (1973-75, and the only two-time Heisman Trophy winner) and Ray (1977) Griffin.

EATtheENEMY
Reynoldsburg, a suburb east of Columbus, claims the title of  “Birthplace of Tomatoes.” Before Alexander Livingston spent two decades breeding a bigger and sweeter tomato, most people avoided the small and bitter vegetable (yes, we know it’s really a fruit).  He went on to develop 30 different varieties of tomato. My BLT thanks you, Mr. Livingston.

Oddly enough, Ohio is the largest producer of Swiss cheese, made in Amish communities.  Brewster Cheese Company makes more than 85 million pounds of Swiss annually, buying milk from more than 400 dairy farms in Ohio and Illinois. For this week’s EATtheENEMY appetizer, we brought together an unlikely combination of the two foods in Broiled Parmesan and Swiss Tomatoes.

If you’ve never been to a Bob Evans restaurant, you are missing a delight known as sausage gravy and biscuits.  Bob Evans once owned a 12-stool diner in the town of Gallipolis but found he wasn’t getting quality sausage, so he decided to make his own. Truckers would stop on their road trips and purchase 10-pound tubs to take home.  The sausage’s popularity grew so he and his wife, Jewell, invited people to their farm in Rio Grande, OH. From there, Bob Evans sausage and restaurants took off. My mother-in-law, originally from Kentucky but relocated to Ohio (ala Hillbilly Elegy), talks about her mother making a large skillet of sausage gravy and many biscuits from scratch every morning to feed the 14 family members before a busy day on the farm.  My MIL’s job was to stir the gravy, so it wouldn’t stick to the cast iron pan. She still makes it every time we visit, and Jeff has upheld the tradition here with Bessie’s Sausage Gravy and Biscuits.  We’ll admit to using refrigerated biscuits this time, but have certainly made our fair share from scratch.

Buckeye candy is, simply, a peanut butter ball dipped in chocolate without being completely coated. It is a perfect mix of sweet and salty.  Yes, it’s supposed to look like the nut of a buckeye tree (or a “buck’s eye,” which is how the buckeye tree got its name). Don’t mix them up, though, as all parts of the buckeye tree are toxic.

DRINKtheENEMY
Of course, there has to be a Buckeye Martini–just substitute black olives for green in a traditional dry gin martini.  We had to feature Columbus brands we brought back from a tour of Watershed Distillery a few years ago.  (I’m shocked they haven’t been consumed since then!)

Also seen in enemy territory
A must-see in Columbus is the historic German Village neighborhood.  While it is primarily residential, one of our must stops is The Book Loft, which boasts “32 rooms of all new books at discount prices.”  Over the years, we’ve seen it change from deeply discounted remaindered books to mostly new books at 5% below list price, but you never know when you might find that treasure. After all, 32 rooms is A LOT of books!  Of course, you’ll never be hungry in German Village with several delicious options: Katzinger’s Delicatessen has giant Reubens, Schmidt’s Restaurant und Sausage Haus boasts a half-pound cream puff, and The Thurman Cafe is known for its burgers (don’t miss the Thurmanator!).

Columbus has birthed many restaurant chains: Wendy’s, Max and Erma’s, Buffalo Wild Wings, Arby’s.  Finish off your meal with something sweet, cold, and creamy.  Ohio has you covered there, too, with a frosty trifecta: Graeter’s (from Cincinnati), Jeni’s Splendid (from Columbus), or Whit’s Frozen Custard (from Granville).  Who makes your favorite flavor?

There are also a few distilleries to check out: Watershed (mentioned above), Middle West Spirits, 451 Spirits, and newcomer High Bank.